It is a well known, widely appreciated fact that the Washington establishment essentially controls our entire political world here in America. Despite the fact that we are, on paper, a democracy, the real power has always laid in the least desirable places. That fact is even more obvious and painful today, since a man who is the absolute pinnacle of the right wing establishment resides in the White House – President Donald Trump. So, in this situation, there are very few strong left wing voices that can speak up for justice and fairness and actually have some power to do the right thing once in a while. One of those voices is Supreme Court justice and American hero, Ruth Bader Ginsburg.

Very sadly indeed, recent months have seen Ginsburg out of action thanks to cancer. The entire American left – including us here at Blue Side Nation – have been holding our breath in the desperate hope that she would be OK. Well, now, it is with great pleasure that we can report that RBG is doing very well indeed and will be heading back to the Supreme Court bench very soon to continue standing up for American rights and values. 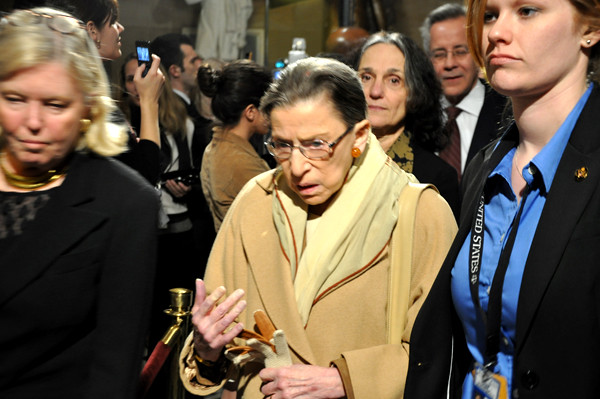 It has been confirmed that Ginsburg has no remaining signs of cancer ever since her last round of surgery in December, and her doctors have stated publicly that she will be needing no further treatment. They have said that she needs about another week of rest, but after that she will be abck in action. “Her recovery from surgery is on track,” court spokeswoman Kathleen L. Arberg said of the 85-year-old justice. “Post-surgery evaluation indicates no evidence of remaining disease, and no further treatment is required.”

If the test results at this stage had been slightly different – if the pathology report showed that there was even the tiniest trace of cancer within the lymph nodes – then her chances of a total recovery would have gone way down, and certainly not at this kind of speed. Thankfully, the results were entirely positive, meaning that it is now not long at all until she can get back to work, and continue to participate in making decisions on cases on the basis of briefs and transcripts.

Ginsburg is not new to this kind of thing either – this is actually the third time she has had cancer. She is showing no signs of bowing to weakness though, and we are all much better for it.

Trump’s Foreign Policy Attempts Are Nothing Short Of An Embarrassment